Our Planet’s in Serious Trouble 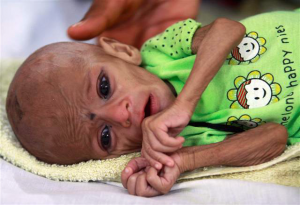 Our world is undergoing vast and rapid change. Population levels have reached 7 Billion. Every 12 years adds a further Billion. Regular natural disasters are causing loss of life or injury. Healthcare, preventative medicine and life-changing surgery is non-existent or inadequate in many developing countries.

Global warming is causing glacial melting, so by 2035 one Billion people under the Himalayan watershed will be deprived of water. Fierce competition for dwindling resources, globalization, and the gap between rich and poor is placing every developing country under unprecedented stress.

Currently, there are over 100 developing countries in need. Approximately one-third, or 2.3 Billion people need assistance. This overwhelming number demonstrates the need for Global Flying Hospitals. Presently, access to high-quality health care or adequate hospital facilities for these millions in developing nations needs immediate action and plans.

The United Nations has established the 2015 Millennium Development Goals, a set of eight goals to end poverty through to providing adequate medical care. So urgent is the need to build a sustainable humanitarian model to solve the world’s mounting problems, that the UN, WHO, DAVOS and many Foundations, as the Gates Foundation, have increased their efforts to find solutions.

Global Flying Hospitals believes that life is beautiful for two-thirds of our planet’s inhabitants.
We must now help… and share with the suffering bottom third.

There are hundreds of healthcare problems faced by over 2 billion of our planet’s inhabitants.
Here is just one:

KATSINA, Nigeria – Dr. Kees Waaldijk began surgery shortly before 10 a.m. one recent Saturday in a cement-walled operating room in this city near Nigeria's northern border. More than five hours later, orderlies carried the last of four girls to the recovery ward. In the 90 degree heat, Dr. Waaldijk's surgical garb had turned dark with sweat.  "We are finished for the day!" he barked.

It was the last thing the dozen girls who squatted in the open-air corridor outside wanted to hear. Leaping up, tracking wet footprints and soaked skirts across the floor, they besieged the towering, white-haired surgeon, holding out orange case files, their names scrawled on them in black marker.

"Big eyes, with a question mark:  'When is it my turn?' " he said later in his office, filled with medical books, suture-filled suitcases and damp socks and T-shirts hung on chairs to dry. He held up his hands. "The eyes are following you everywhere you go. I tell them it is one man, two hands and many women.

"What brings the girls to Dr. Waaldijk – and him to Nigeria – is the obstetric nightmare of fistulas, unknown in the West for nearly a century. Mostly teenagers who tried to deliver their first child at home, the girls failed at labor. Their babies were lodged in their narrow birth canals, and the resulting pressure cut off blood to vital tissues and ripped holes in their bowels or urethras, or both.  Now their babies were dead. And the would-be mothers, their insides wrecked, were utterly incontinent. Many had become outcasts – rejected by their husbands, shunned by neighbors, too ashamed even to step out of their huts. 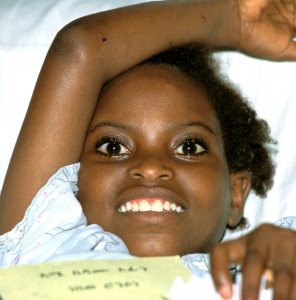 Until this decade, outside nations that might be able to help effectively ignored the problem. The last global study, in which the World Health Organization estimated that more than two million women were living with obstetric fistulas, was conducted 16 years ago.

Nor has a recent spate of international attention set off an outpouring of aid. Two years of global fundraising by the United Nations Population Fund, an agency devoted in part to improving women's health, has netted only $11 million for the problem.  The number of new cases is far outpacing repairs – not just here, but in other sub-Saharan nations like Kenya, Malawi and Uganda. Despite recent strides, said Thoraya Ahmed Obaid, the Population Fund's executive director, "at the current rate of action it will take decades to end fistula."

Few doubt that the problem is most concentrated in sub-Saharan Africa, where poverty and rudimentary health care combine with traditions of home birth and early pregnancy to make women especially vulnerable. In Nigeria alone, perhaps 400,000 to 800,000 women suffer untreated fistulas, says the United Nations.

Dr. Waaldijk , a tall, 64-year-old Dutchman who rides a circuit nine months each year from his home in the Netherlands to Babbar Ruga Hospital here and others in rural Nigeria, says he has operated on 15,000 fistulas in 22 years.

Obstetric fistulas are easily prevented by Caesarean sections. But in sub-Saharan Africa – excluding the region's richest nation, South Africa – the average doctor serves 6,666 patients and villages are often linked by little more than dirt paths. Many rural women labor fruitlessly for days before being taken, sometimes in a cow-pulled cart, to a road leading to a hospital.

Dr. Waaldijk remembers one patient well. She managed to push out only her baby's head before collapsing from exhaustion in her hut, he said. Her brother carried her, balanced on a donkey, to a road, where a bus driver demanded 10 times the usual fare to take her to a hospital. She half-stood, half-sat for the trip, her dead baby's head between her legs, her urethra ripped open.

One in 18 Nigerian women dies during childbirth

"This is what is happening," the doctor said. "Nobody will believe it." The fistulas point to the broader plight of millions of African women: poverty; early marriage; maternal deaths; a lack of rights, independence and education; a generally low standing. One in 18 Nigerian women dies during childbirth, compared with one in 2,400 in Europe, the Population Fund says. A larger share of African women die in childbirth than anywhere else in the world.

Were it widely available, the United Nations agency states, a $300 operation could repair most fistulas. But Mozambique, with 17 million people, has just three surgeons who consistently perform those operations. Niger, population 11 million, has but six, the organization reported in 2002. Nigeria, Africa's most populous country with 137 million people, has eight fistula repair centers, and Dr. Waaldijk, a Health Ministry employee, said he had trained 300 doctors in fistula surgery. Once trained, though, many leave for better paid jobs in wealthier nations.

Nearly 600 women showed up, some arriving in busloads, when international and Nigerian officials staged a 14-day treatment campaign at Babbar Ruga and three other hospitals in February. Three hospitals ran out of beds. The youngest patient was 12. The oldest, more than 70, had been incontinent for a half-century.

"The health care system is not coping with it," Dr. Waaldijk said. "You go to a hospital and they have no working facilities. You say, 'You need this, this, this and this.' You go back. No water! No water in the whole hospital! You go back again, no lights!  "So where do you start?"

Dr. Waaldijk started here at Babbar Ruga Hospital 22 years ago, after a misspent youth followed by a lucrative surgical practice in Europe mixed with public health stints. Only when he came to this dusty town of open sewers and fickle electricity did he find his life's calling, he said.  With help from government and private donors, he slowly built Babbar Ruga into one of Africa's two biggest fistula centers, a small city of yellow concrete wards and hostels that typically houses 200 patients.

Those recovering from his surgery walk awkwardly about the grounds, catheters emptying between their legs into plastic buckets in girlish colors of pink and purple. Relatives camp by the dozens under the trees amid cooking pots, straw mats and tea kettles.

Dr. Waaldijk still hauls sutures, needles and anesthetics in big black suitcases from Holland to be certain of a reliable supply. He operates partly by the sun, wheeling his surgery table across the room to catch the best light, and logs his results on a laptop protected by a backup generator.  More than a third of his patients are 15 or younger; another 30 percent are between 15 and 20. Most were married at 11 or 12, before menstruation. Nearly all bring with them tales of hardship, suffering and rejection.

Safiya, 23, was in the post-op ward after living for a year in the hut of a traditional healer who tried to cure her by stuffing potions into her vagina. Daso, 23, said she had leaked urine and feces for five years. Her husband divorced her.  Rumasau, 16, unluckily began labor on a Saturday, when her local hospital had no physician for her. She had to wait until the following Tuesday for an emergency Caesarean section – not an uncommon delay here, Dr. Waaldijk said.

For the few who get help, fistula surgery is life-changing. Zainabu Ado, 19, said she had leaked urine and feces for a year before coming to Babbar Ruga.  "People ran from me, even members of my own family," she said during an interview in Sululu, a tiny village hidden on a barely passable dirt road across the border in Niger. "My husband abandoned me. Nobody talked to me. Nobody visited me. For that whole year I stayed indoors."

At an impromptu gathering this month, Ms. Ado arrived resplendent with beaded jewelry, and her neighbors made room for her on straw mats in the sand. Problems linger, she said. Her husband never bothered to divorce her, leaving her unable to remarry. She suffers a slight limp from lingering nerve damage. But compared with a fistula, such troubles are nits. "I am completely healed," she said, flashing a smile. Her village is too small to appear on any map. Yet she is neither Sululu's first nor last fistula patient. She heard of Babbar Ruga Hospital from a neighbor who had undergone fistula surgery there. Ms. Ado, in turn, told Gide Gero.

Four feet 10 and nut-brown, Gide arrived at the hospital in September and spread her mat in the corridor outside the operating room. Her eyes were lively, her smile gap-toothed. She looked perhaps 12, but said she was 16.  Isolation and the traditions of her Fulani tribe governed her upbringing. She never went to school. Once she reached puberty, each suitor was allowed to specify that a decorative design be carved in her face as a sign of his interest.

She said she had fallen in love with one, but her grandfather had insisted that she marry her much older cousin, whom she did not meet till her wedding day. At 13, her grandparents decided, it was high time that she settle down. "Two reasons," her grandmother said in an interview. "She had started menstruating. And she had developed breasts." Early this July, she started labor on a bed of bound sticks covered with a straw mat. For two days she struggled. Finally it took five hours for two cows to pull her family's wooden cart to the nearest hospital, 10 miles away.

There Gide labored for two more days before managing to expel a dead baby boy. When she discovered the next day that she could not control her urine, she said, she was dumbfounded. As a solution, she learned to wait as long as eight hours before allowing herself a sip of water. Her fistula, it turned out, was a small one. Twenty minutes after she climbed atop Dr. Waaldijk's operating table, she was stretched out in the first bed in the recovery room, her grandmother by her side.  "She will be fine," Dr. Waaldijk predicted. Fine, that is, unless her next labor begins in the same village, far from medical treatment, as is all too likely. In which case, he said, her affliction will simply repeat itself.

"To be a woman in Africa," Dr. Waaldijk said as he stitched her last sutures,
"is truly a terrible thing."